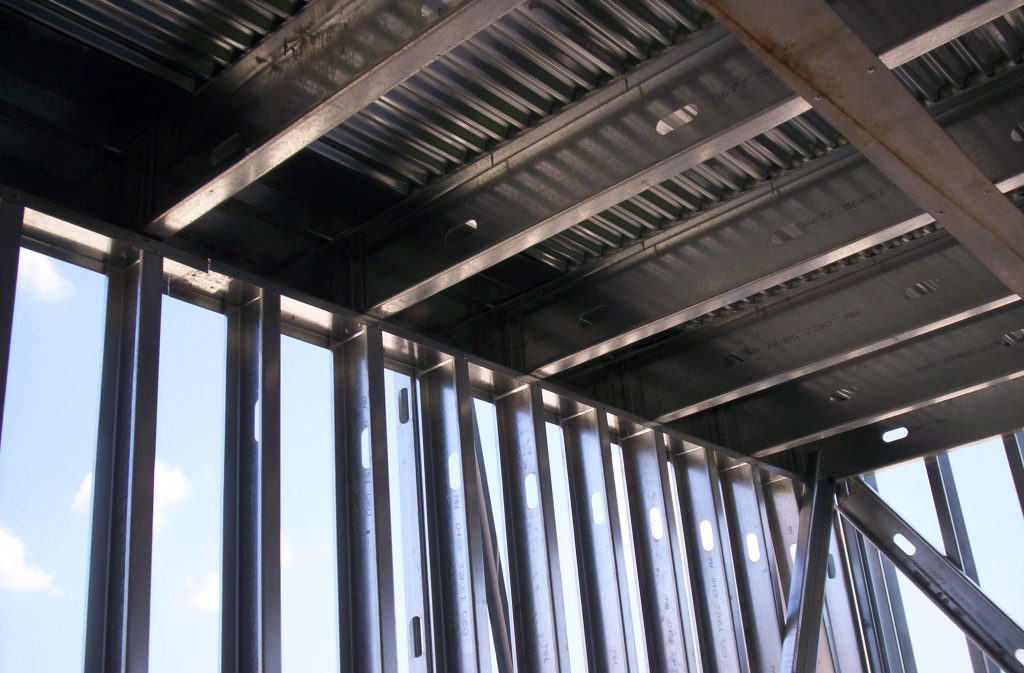 Floor joist assembly consists of cold-formed steel (CFS) joists, a metal deck with concrete topping or sheathing attached to the top joist flange, and discrete or continuous bracing attached to the joist bottom flange. The assembly might include other non-structural elements such as gypsum board on the ceiling side, cavity insulation and resilient channel intended for fire, and sound blocking as described below in this article.

Fire-resistance ratings have long been used by UL and the building codes to measure the performance of building components or assemblies in a fire situation.  Fire-resistance rating of a floor system classifies the ability of the floor assembly to confine and isolate fire within a zone comprised of the assembly. The ratings are obtained from fire tests designed to determine the time it takes for a fire to raise the temperature to unacceptable levels. Building codes require fire resistance ratings that are based on laboratory testing done in accordance with ASTM E 119: Standard Test Methods for Fire Tests of Building Construction and Materials.

The Sound Transmission Class (STC) of a floor system measures the capacity of the floor assembly to block airborne sound transmission.  STC is measured as a number, and higher numbers represent a better capability to block airborne sounds. STC can be measured through a laboratory test which is based on ASTM E 90, or a field test that is based on ASTM E 413.

IBC code in Section 1207 requires floor assemblies separating dwelling units from each other or from public or service areas to have STC of not less than 50 (or 45 if field tested) for air-borne noise. Designers of higher performance buildings often specify STC of 55 to 60 to ensure getting the best floor system to block airborne sounds. Elements that are known to improve floor STC are increased system mass, decoupling of structural elements, added cavity insulation, use of sound dampers, and sealing and caulking of joints and cracks.

The Impact Insulation Class (IIC) of a floor system measures the capacity of the floor assembly to block impact sound spread through the assembly and the structure. Impact sound transmission arises from a variety of sources, in particular the movement of individuals within a building.  Similar to STC values, IIC also is measured as a number, and higher numbers represent less sound transmission. The procedure for the IIC test is defined in ASTM E 492. IBC code in Section 1207 requires floor assemblies separating dwelling units or between a dwelling unit and a public or service area within the structure to have IIC of not less than 50 (or 45 if field tested) for impact sound. Elements that are known to improve floor IIC are applying floor treatment and avoiding hard floor surfaces.

Fire-resistance rated floor assemblies are identified in the UL Fire Resistance Directory and can be found at the Underwriters Laboratories website. Data for STC and IIC can be found for some assemblies through specific publications such as “A Guide to Fire and Acoustic Data for Cold-Formed Steel Floor, Wall & Roof Assemblies” by the Steel Framing Alliance.

FDR Engineers perform research studies before specifying the floor assembly in order to pick the most suited system for the project. Structural as well as non-structural design considerations are covered by the design team to the intent of design. This simply saves time and effort for FDR’s clients, and ensures the building is safely designed and erected.

Nabil Rahman, Ph.D., P.E., a Principal and Co-founder of FDR Engineers, has more than 26 years of experience in building design, development of engineering software, as well as the special design and analysis of structures against extreme loads (progressive collapse, blast and impact). Dr. Rahman is a graduate of McMaster University, Canada where he earned his Ph.D. in Civil Engineering. He has expertise in the area of cold-formed steel design utilized in the light steel framing industry and has recently served as the President of the Cold-Formed Steel Engineers Institute (CFSEI). Dr. Rahman is the current chairman of the ASCE-SEI Committee on Cold-Formed Steel and is a member of AISI’s Committee on Specification for the Design of Cold-Formed Steel. Dr. Rahman has served as an Adjunct Associate Professor at the Civil Engineering Department of North Carolina State University.